Last September I had the opportunity to present a paper on Bodies and Display for the Death and Culture II conference at the University of York in the United Kingdom. This was a fantastic opportunity to bring that research to an international audience. While in the UK, I also visited several London and York museums, met with other amazing #DeathStudies scholars, and did some good research for my book, What Remains. 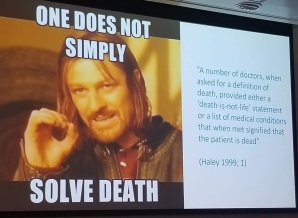 According to the DaCNet website, “The Death and Culture Network based at the University of York seeks to explore and understand cultural responses to mortality. It focuses on the impact of death and the dead on culture, and the way in which they have shaped human behaviour, evidenced through thought, action, production and expression. The network is committed to promoting and producing an inter-disciplinary study of mortality supported by evidence and framed by theoretical engagement.” This is a true interdisciplinary work of genius, and a fun group of people to meet and collaborate with for sure.

I can not emphasize enough how much I enjoyed this conference and the other presentations and discussions held formally and informally. I will explore those in future blogs in more detail.

In my presentation I explored the legacy of freakshows and cabinets of curiosities on the current guidelines and ethics of museums in regard to the display of human remains. Topics I am brought up included: ethics, public reactions, and responsibilities of public historians with regards to the display and exhibition of human remains. I also presented on the racial, ableist, and class implications of displaying human remains in natural history, history, and medical museums. I also mentioned cultural patrimony of objects, as well as human remains as museum objects. I posed many questions in my talk about how old do human remains have to be to be considered “objects” and no longer people? How do visitors react to various human remains on display, from mummies, to Victorian hair wreath memorials, to skeletons or cremated remains? Human remains have been a part of exhibitions since the first museums opened in various forms; from the case of Sarah Baartman and nineteenth century freak shows, to modern displays of mummies and medical specimens, the human body has often been a source of emotion, intrigue, and education. Have museums moved beyond the “freakshow,” or are current human remain displays merely an extension of the spectacle of the earliest museum?

I had a blast doing this presentation, and I even managed to finish my talk with 4 seconds to spare. The audience and other panel members were so accepting and helpful, and they brought so many insights to my talk. I can’t wait to be back in York in 2020 for DaCIII!

My title page contents View all posts by katiestringerclary

Views expressed at Mors Mortis Museum are © 2019 by Mors Mortis Museum by Trish Biers and Katie Clary, and not necessarily reflective of any institution with which we are, or have been, affiliated.
This work is licensed under a Creative Commons Attribution-Noncommercial-Share Alike 3.0 Unported License. You can share this work, as long as you attribute it to Mors Mortis Museum and you do not use it for commercial purposes.
%d bloggers like this: